How ‘Mother’ and ‘Father’ Archetypes Shape Our Children

The term archetype is a concept that Swiss psychologist, Carl Jung, coined to describe an idealized or prototypical person, concept, or object. In a nutshell, archetypes can be thought of as the general idea our mind conjures when thinking about any of the above. For instance, if someone asked you to visualize an object, such as a car, the first image that comes to mind could be considered your “archetype” of a car. According to Jung, these archetypes reside in our unconscious minds, not just as pictures, but as ideals for how people behave too.

There are four basic archetypical energies that represent family members. These ideals can help us understand the closest people in our lives as well as our own identity or role in others’ lives. They are the Father, the Mother, the Boychild and Girlchild. It is important to recognize that each archetype has positive and negative aspects. For instance, a loving, positive mother archetype nurtures, teaches, and guides with unconditional love. A negative mother archetype is controlling and abandoning or even aloof. 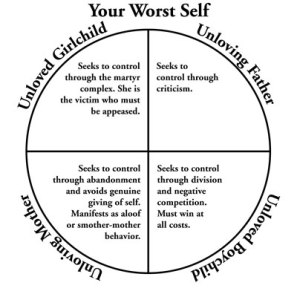 It gets really interesting when we extend this concept to understand others surrounding us. Broadly speaking, the archetypal energy of a person can be seen as a guide for what they have in their lives and/or what is lacking. For instance, a teenage boy that is afraid to participate in school sports and has trouble test-taking may be responding to negative archetypal father energy. A positive father archetype is supportive and protective, but a negative archetype seeks to control through harsh criticism. It’s no wonder that a boy exhibits shyness and lack of engagement when his father presents major negative archetype energy.

Generally, neither parent is black or white with their archetypical energy aspects. There is a significant amount of both negative and positive qualities. It should come as no surprise that meaningful mirroring between parent and child of positive energies is key to success later in life. For instance, Jung discusses the idea that the “Good Enough Mother” archetype tends to produce an adult that can better negotiate their relationships. Why? Because at an early age, the child that received that positive archetypal mother energy learned to trust that his/her needs would be met eventually, if not instantly. This allows the child to learn trust. By trusting others, we can form strong, loving bonds of mutual support.

As to be expected, there can be problems when a child is not receiving enough of the positive archetypal energies from a parent. When we try to understand why some young men and women commit violent crimes, vandalize, or show self-hatred, we ought to look to the archetypal energies affecting them. Perhaps, the problem is not only that one or more parents in a troubled child’s life may be mirroring negative traits, they could be mirroring nothing at all. They may be emotionally (or literally) absent. In that case, what are we as a society to do?

One suggestion is to consider community interaction. If a parent is unable or unwilling to provide positive archetypal energy, it is important to offer this through other means: a supportive relative, such as a loving aunt or uncle, a teacher mentor, or even a community center that can provide needed direction and good role modeling and youth mentoring.